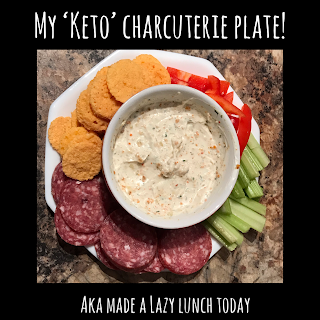 I really do love the Whisps crackers though - perfect crunchy cracker replacement without the grainy side effects! They definitely help to curb that 'chip/cracker' craving! 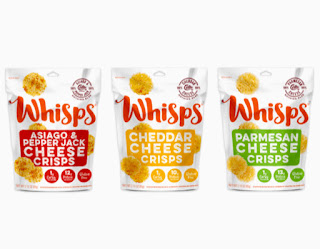 The Garden Vegetable Dip from Epicure is totally Nom nom!

Basically did 3/4 cup of Greek Yogurt with 1 tablespoon of mayo and 1 tsp on Garden Vegetable seasoning.

There are so many ways you can use the seasonings from Epicure!
I am still trying to grasp the whole 'macro' counting with Keto lifestyle ... this lunch was a little high in the carbs despite having no grains cause I keep forgetting that dairy has carbs! 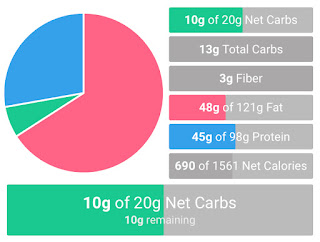 
Posted by Totallyawake4-life at 11:02 AM No comments:

Nom nom loving all the inspiration and knowledge being shared from Lynn Grushka in her Healthy Keto Life Community Group - today’s offering is Chipotle Bacon and Egg salad for lunch today! 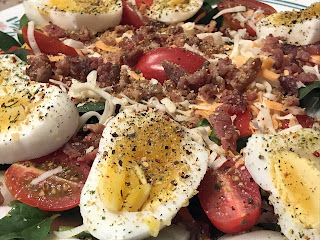 Getting closer to the macro goal - definitely takes some rethinking of the brain to embrace all the healthy fats! 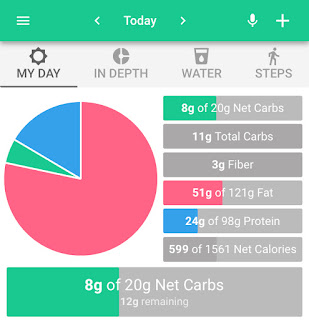 I made my Chipotle dressing using 1 tsp Epicure Chipotle & Cheddar seasoning, stirred into 1 tbsp mayo, 1 tbsp coconut vinegar and 1 tablespoon 35 % whipping cream for a nice creamy dressing with a tiny kick of heat. 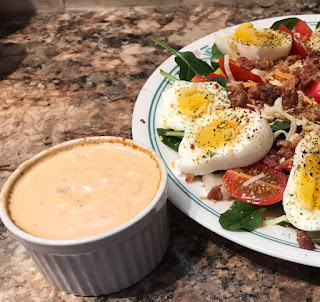 *this post contains affiliate links
Posted by Totallyawake4-life at 10:57 AM No comments:

I am back with another challenge from over at Scrapbook Nerds and Friends featuring the Concord and 9th Birthday Basics turnabout stamp set available on their website. 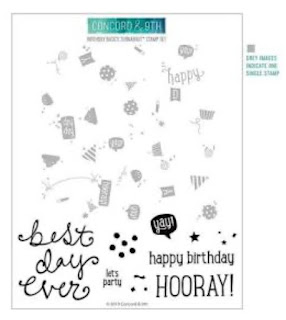 I had a little scrap leftover from my last 100th Birthday card I made earlier this month! 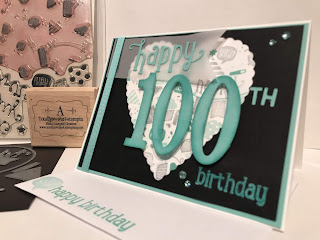 My motto is never throw out your scraps because I used it to make this adorable second birthday card! 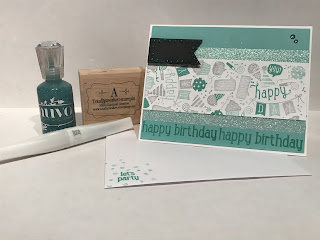 Paired the scrap with some sponged glitter paper, Nuvo drops and Wink of Stella for a quick and simple sparkly card! 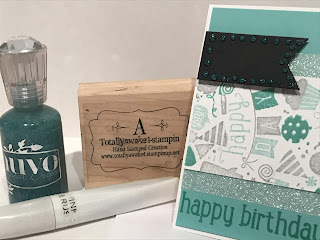 *this post contains affiliate links
Posted by Totallyawake4-life at 4:43 PM No comments:

Squee .... I am so exited. It is officially being announced today! 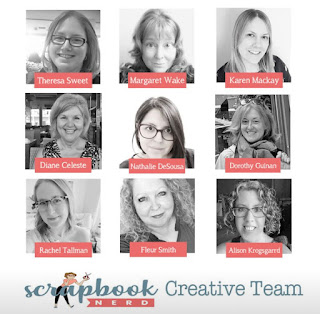 I get to try my hat at being a part of the Scrapbook Nerds creative  team!

Thank you so much for the opportunity and I am looking forward to playing with my creative team goodies and the upcoming design challenges ... make sure to head on over to their Facebook group so you can play along with the challenges too  💕

Posted by Totallyawake4-life at 1:03 PM No comments:

There is lots of talk in the CPL groups on Facebook lately about creating 'noise' and an 'uprising' around challenges faced in the early learning and care field. ECE have created groups like ECE's Unite to try to organize province wide strikes and other initiatives! 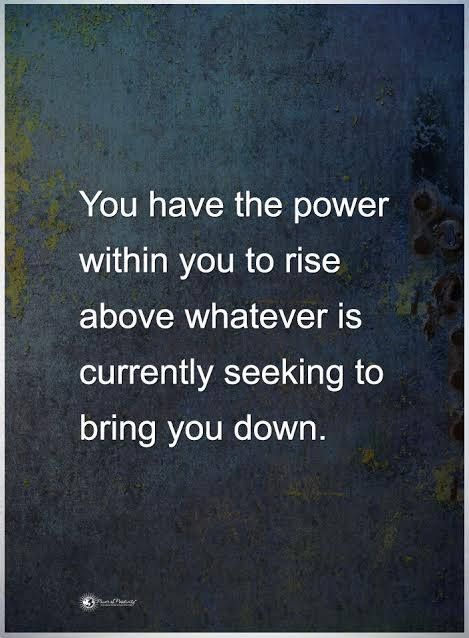 I admire their passion about wanting change in our field - over the past 30 years I have seen many times and many different groups try to organize walk outs and other strike type advocacy campaigns only to see them fall flat or backfire on ECE whose employer fired or reprimanded them for taking what amounts to illegal strike action and other work to rule behaviors that many ECE do not realize they cannot engage in when they are not protected by a Union and the Labor laws that apply to unionized workers!

I am all for advocating for change and improvement in our field but I cannot help but want to encourage these ECE that as members of a regulatory body now with the government mandate of the College of ECE we need to be very careful in HOW we advocate for change. The language we choose and the manner we choose to advocate and so forth and ensure it is done in a way that does not violate the code of conduct or Professional standards of the College. 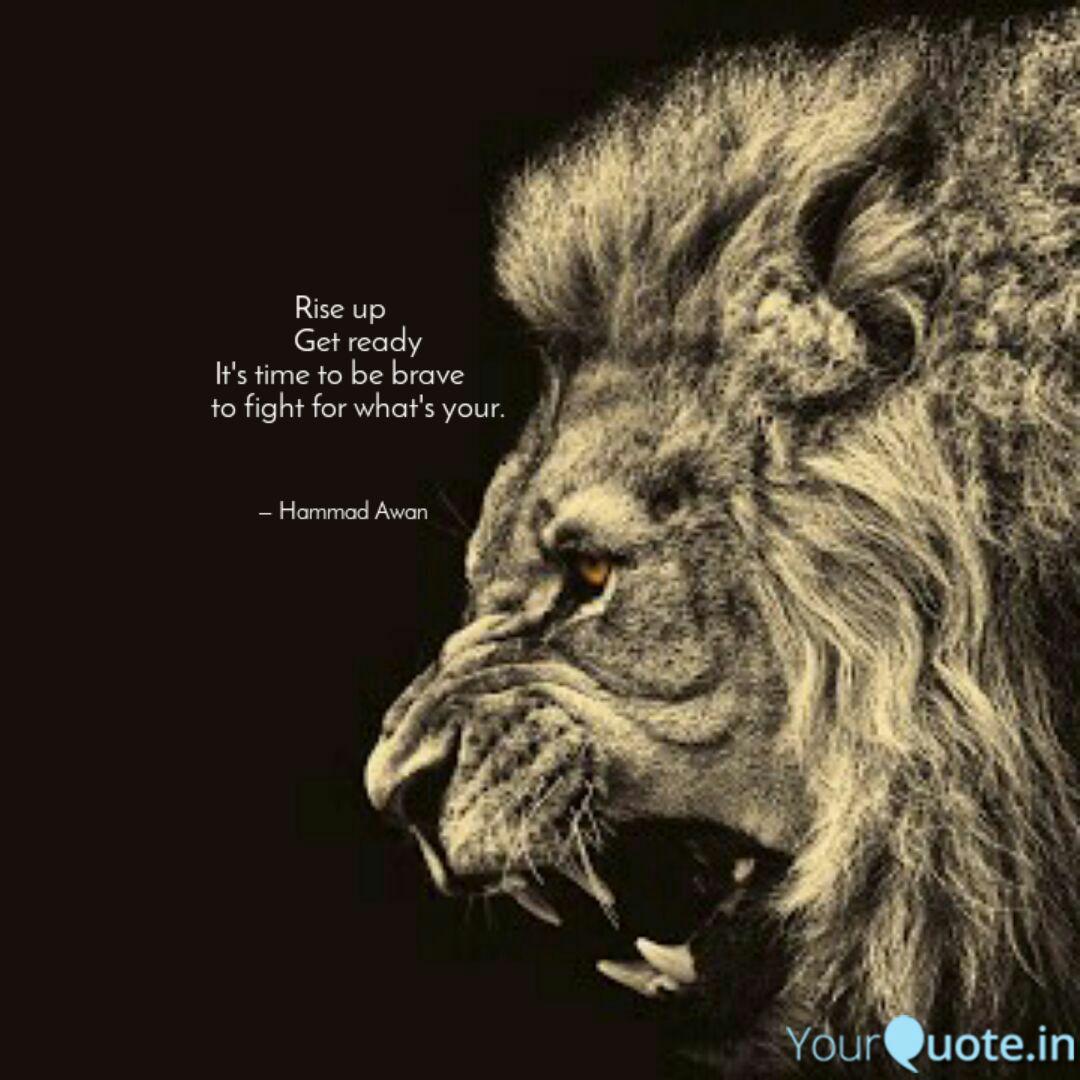 The AECEO is our designated professional association in Ontario whose mandate is to advocate for all these things and in my opinion we should be working through these exsisting infrastructures that know the rules and laws and are experts in the advocacy they have been engaged in for decades now.  These same people seem to whine that the AECEO is not doing 'enough' but the reality is that sadly their membership is very low compared to the College of ECE because it is a voluntary organization and ECE just do not choose to belong to it for various reasons. However if all the eligible ECE in Ontario joined the AECEO than they would have a much much larger budget to work with in social media campaigning, in actively having staff who were lobbying at a government level and so forth to be our 'collective voice'. Its been a long time since I sat on the London AECEO branch board but back than the total membership for the AECEO was minuscule and I do not imagine it has grown much in the past decade in comparison as with the College of ECE many former members left because they did not think they needed to have both memberships. However the College is NOT an advocacy body it is a regulatory body they ultimately serve the public   ... it is hard for the AECEO to create a collective voice when so few of us belong to it or actively support it. After 30 years in the field my active advocacy energy is dwindling but I am still a paid member of the Association to support those who still have the energy to 'fight' the good fight. 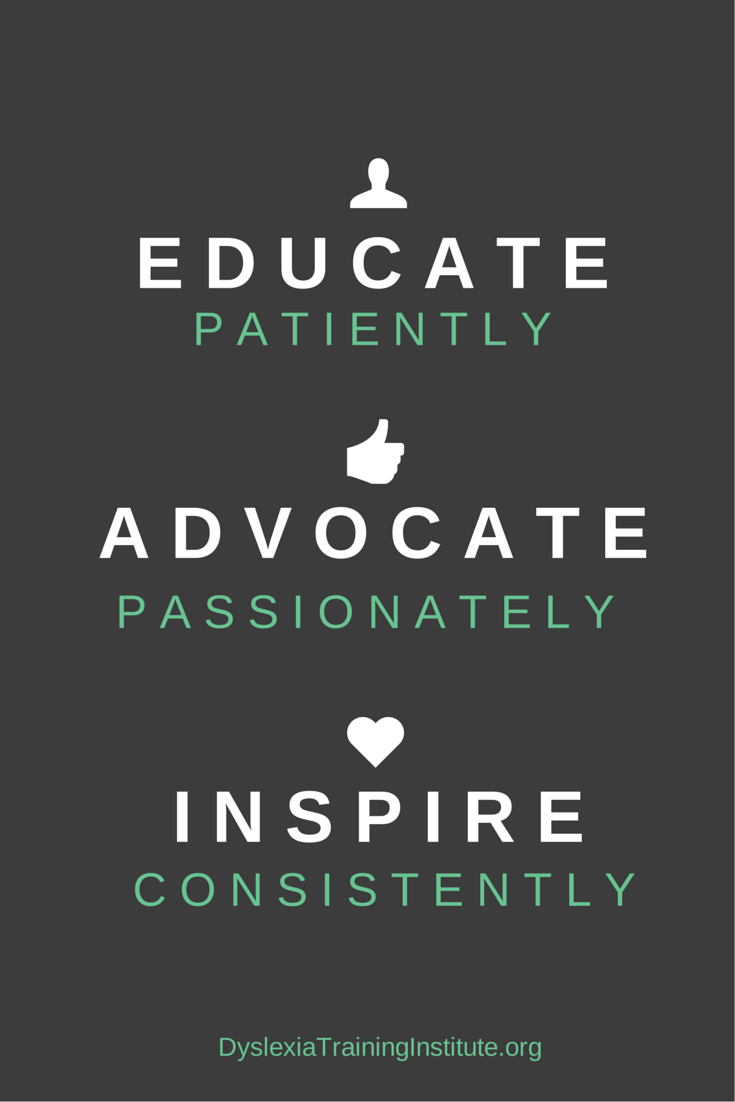 I know many people feel that having to pay yet another fee to belong to the AECEO is unfair - however since it is next to impossible to unionize ECE at an employer level because employers do not have the deep collective tax payer pockets of the government that public education system has the reality is that nothing is ever going to change with us being so isolated as a 'collective' so belonging to the AECEO is the only real option for getting a 'collective voice'. The IMO the $60 membership fee would be much CHEAPER than dues you'd pay to a union if you did manage to unionize your centre at an employer level and they union still would not be able to do much to actually make financial changes to wages / paid pd and other financial challenges we face anyway! Nothing is going to change much with our wages until such a time that there is a true 'universal childcare' system that works the same as public education does where the 'government' is our collective employer - and I honestly do not see us achieving TRUE universal childcare in my lifetime because we just do not have the societal value in early childhood education that is needed and it will remain unlikely until the field itself raises the professionalism bar considerably by making 'learning visible and valued' in our programs both for the children AND for ourselves!

Be the change we want to see! 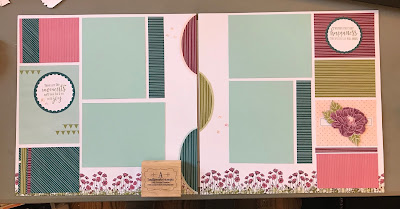 Using up all the pieces including dissecting the lined envelopes! Paired with the Poppy Moments stamp set for my sentiment titles and Painted Poppy stamp set image along the bottom! 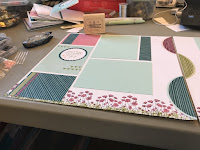 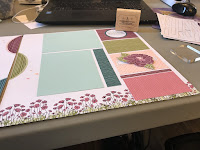 As always I need to print so photos to fit my mats ... one day I might have to spend a crop doing JUST that!

Posted by Totallyawake4-life at 2:33 PM No comments:

For this weeks Scrapbook Nerd and Friends challenge I created this card! 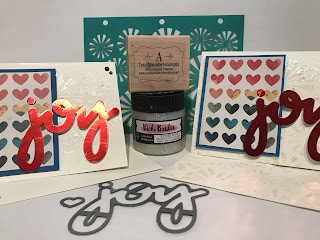 This card challenge gave me a chance to play with the Vicki Boutin Texture Paste, her colour kaleidoscope- Botanical Stencil 3 pack and combined with her Wildflower & Honey - Mingle DSP which are available on the Scrapbook Nerd website! 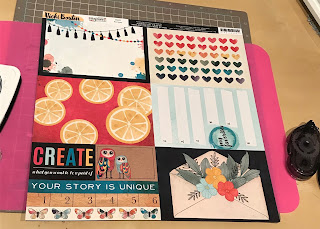 These 12x 12 mingle pages are awesome for both scrapbooking as well as cardmaking! One piece of designer series paper can bring you 6 or more focal points for your projects!

For this card I cut the 4 x6 heart section out and than cut it down to 3x4 size to make 2 little heart focal points for the card. They are mounted on a blue cardstock to form a frame for them. 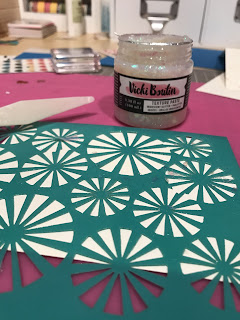 I than used the stencil on vanilla cardstock with the Vicki Boutin textured paste. Scoop and spread a thin layer with a palette tool. Let dry before assembling your project.

For my sentiment I paired it with the Joy die from the Concord and 9th Joyful Tiles bundle cut out in red foil cardstock. 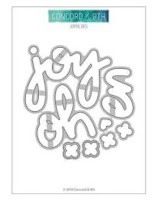 Perfect quick and simple less than 10 minute card for you letting your loved one know they bring you joy this Valentines Day!

Posted by Totallyawake4-life at 1:49 PM No comments: 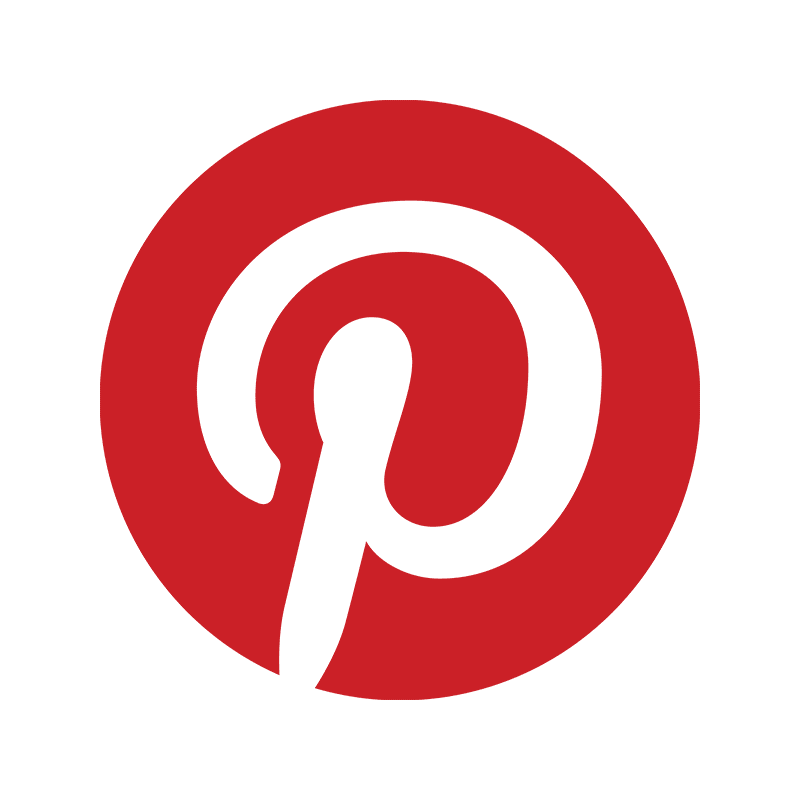 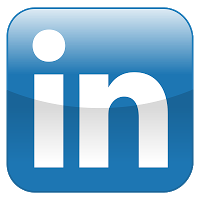